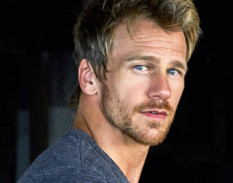 Rusty Joiner began his career as a model and appeared in campaigns for Abercrombie & Fitch, Levi's and Prada. He appeared on the cover of Men's Fitness Magazine a record number of 12 times. Joiner then transitioned into acting and made his way to Hollywood's "Ones to Watch" list of up and coming stars. He starred in the independent feature "Voiceless," which has received critical acclaim.