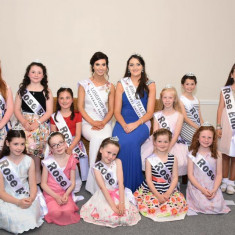 Message
The festival has its origins in the local Carnival Queen, once an annual town event, fallen by the wayside due to post-war emigration. In 1957, the Race Week Carnival was resurrected in Tralee, and it featured a Carnival Queen. The idea for the Rose of Tralee International Festival came when a group of local business people met in Harty's bar, Tralee to come up with ideas to bring more tourists to the town during the horse racing meeting and to encourage expats to return to their native Tralee. Led by Dan Nolan, then Managing Director of The Kerryman newspaper, they hit on the idea of the Rose of Tralee Festival. The event started in 1959 on a budget of just £750.[2]

The founders of the organisation were Billy Clifford, an accountant with the Rank Organisation, who was one of the first recipients of the Golden Rose award (which was inaugurated to celebrate the 10th anniversary of the Festival of Kerry); Dan Nolan, involved with the Tralee Races; Jo Hussey, a shopkeeper in Tralee; and Ted Keane Snr, a local restaurateur.

Originally, only women from Tralee were eligible to take part; in the early 1960s it was extended to include any women from Kerry, and in 1967 it was further extended to include any women of Irish birth or ancestry.[2] Recent winners have included three women of mixed heritage, namely Mindy O'Sullivan (Filipino-Irish), Clare Kambamettu (Indian-Irish) and Kirsten Mate Maher (Zambian-Irish). On winning the title in 2018 Maher said "There is no 'typical Irish woman'. We're all different and we all come in all shapes and sizes and skin colours... We're such a diverse community, and we need to embrace that".[3]

In 2004 the Rose of Tralee Regional Finals were introduced to offer more people an opportunity to participate in the Rose of Tralee International Festival. It was held every year until 2015 in Portlaoise, Co. Laois on the June Bank Holiday weekend.

From 2004 to 2015, the number of Rose Centres grew to more than 65. The Regional Finals became well-established and was a prestigious part of the process to finding the next Rose of Tralee. In 2014 it was announced that the 2015 Regional Finals would be the last, in favour of a revamped selection process held in Tralee.