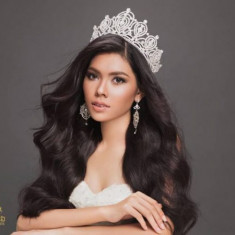 Message
Until the year 2017, Cambodia has never been represented on the Miss Universe stage. One young queen is changing that with her recent win.

The first-ever Miss Universe Cambodia is a 19-year-old high school student named By Sotheary. She is going into Grade 12 at her high school this year while working as a part-time model. Sotheary has significant experience on runways both in Cambodia and other countries abroad.

This queen loves to read and enjoys modern English music. This is not her first pageant as she has also competed in Miss Southeast Asia 2014 and won Miss Elegance and Best Evening Gown. She also placed 2nd Runner-up to Super Model International 2015. She has always dreamed of representing Cambodia at the Miss Universe pageant and that dream has become a reality.

Although she was announced the winner on October 14, 2016, she did not represent the country at the Miss Universe 2016 pageant that took place in January of 2017. This young queen placed higher than the 19 other contestants to take home the Miss Cambodia Universe 2016 crown and the opportunity to be the first to represent her country on the famed stage. Although she will be the only competitor to advance to the Miss Universe stage, other winners will advance to several other international stages, including Miss Earth, Miss Tourism International, Miss Tourism Metropolitan and Miss Tourism Queen of the Year International.

About all the 2016 Miss Cambodia queens There were five total queens crowned last October who represent the country at five different international pageants. All of the titleholders try to do appearances and charity work together including visiting schools and creating eco-tourism campaigns.

All the queens are undergoing extensive training to represent Cambodia to the best of their abilities on their respective international stages. Videos of the walking rehearsals look to be an even mix of work and fun for the queens.