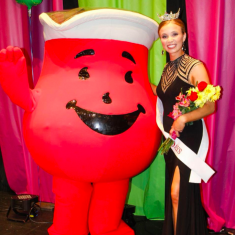 Message
We are a non-profit local preliminary for the Miss America Organization. Miss Kool-Aid Days is crowned each year to compete for the title of Miss Nebraska, and ultimately possibly compete at Miss America.

Are you between the ages of 17-24? Start your journey to Miss America right here in Hastings, Nebraska. Named after the festival honoring the birthplace of Kool-Aid, Miss Kool-Aid Days begins her reign as a key component to the Kool-Aid Days festival, and then prepares to win Miss Nebraska.