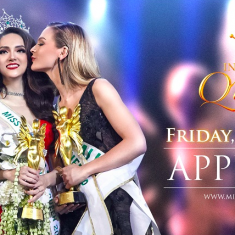 Miss International Queen® is the world's beauty pageant for transgender women from different parts of the world. The pageant is a registered trademark of Thailand company - Tiffany's Show Pattaya Co, Ltd.

The pageant was also named by CNN original documentary television series "This Is Life with Lisa Ling" aired on 26 November 2017. It is held annually in Pattaya City, Thailand since 2004.The mission of the pageant aims towards LGBTQ and Transgender awareness and equality in both society and workforce, while all the monetary profits of the actual televised show goes to the Royal Charity AIDS Foundation of Thailand.

The current Miss International Queen is Jazell Barbie Royale from USA, who was crowned on 8 March 2019.