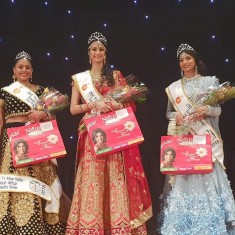 The Miss India South Africa Pageant is an innovative leadership programme which gives our young ladies a platform to express themselves.Ages between 17 -27

The pageant in South Africa is now in its 21st year and began at a time where the lack of opportunities for young Indian women was forcing them to give up on life. In 1991, we affiliated ourselves with Worldwide Festivals in New York and gained entry to an international stage in the form of Miss India Worldwide. The Miss India South Africa Pageant is this country’s longest running cultural event for the Indian community. The competition is open to contestants between 17 and 27 years of age and must be unmarried and not a parent. Entrants must be proficient in an Indian performing art.
The pageant features five segments, an interview, a western, eastern wear, a talent and question and answer.