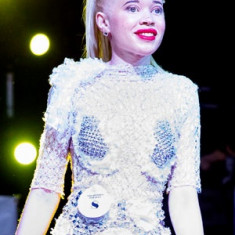 A recent Zimbabwean pageant aimed to increase awareness and acceptance of a genetic disorder, Albinism. The "Beauty Beyond the Skin" pageant was the second African pageant held with this same mission.

The uniqueness of the pageant Thirteen contestants met on Friday as part of the Miss Albinism, which was held at a Harare nightclub. Sithembiso Mutukura, a social work student, won the pageant this weekend. While it may seem normal to highlight the unique beauty of these contestants, it could be potentially dangerous for these contestants to participate in the pageant.

People in some African countries routinely hunt people living with albinism for their body parts, which are allegedly used by witch doctors to create potions believed to bring about luck or wealth. Some people with albinism are kidnapped or sold by family members as well. "The people with disabilities are always looked down upon even in schools," Mutukura said after winning. "I have gone through a lot but I want people living with albinism to be brave and persevere in life. We must continue to advocate for our rights and I hope my win will empower the girl child. People with disabilities must not look down upon themselves." Details about the event This pageant was supposed to take place last year but had to be postponed due to lack of funding. The pageant organizer Brenda Mudzimu expressed her excitement for the ability to actually host the event this year.

The pageant even had a special guest, Tapuwa Muchemwa, a government representative, who expressed the government's continued support for albino citizens' rights.

"We as government strongly advocate that people with albinism deserve their right to life and security and to be protected as well as the right not to be subjected to torture and ill-treatment," Muchemwa said. Ultimately, the goal of the organization is to expand throughout Africa and make the Miss Albinism pageant into a national event.