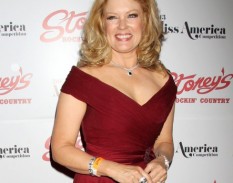 Mary Hart is an American television personality and was the long-running host (1982–2011) of the syndicated gossip and entertainment round-up program Entertainment Tonight, which is the longest running entertainment magazine show of all time. She was also Miss South Dakota 1970.