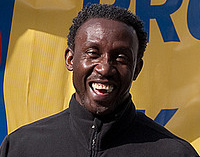 Linford Cicero Christie OBE (born 2 April 1960) is a male Jamaican-born British former sprinter. He is the only British man to have won gold medals in the 100 metres at all four major competitions open to British athletes: the Olympic Games, the World Championships, the European Championships and the Commonwealth Games. He was the first European to break the 10-second barrier in the 100 m and still holds the British record in the event. He is a former world indoor record holder over 200 metres, and a former European record holder in the 60 metres, 100 m and 4 × 100 metres relay.

He remains one of the most highly decorated British athletes of all-time. By the end of his track career Christie had won 24 medals overall, more than any other British male athlete before or since. In 1993 he was awarded the BBC Sports Personality of the Year. Despite first testing positive for a prohibited substance in 1988, it was only following his failed drug testing in 1999 that he was banned from competition by IAAF. 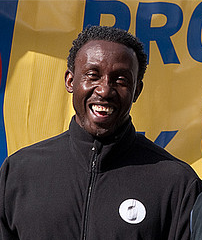