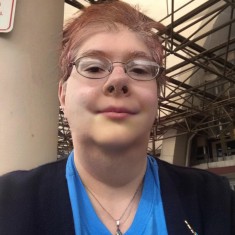 The two words that Hollie Domiano uses to best describe herself are: Renaissance Lady.

Author, webmaster, podcaster, Toastmaster, sorority girl, late night radio DJ, pageant aficionado—she is all of these and more. A native born New Orleanian, she received a BA in communications from the University of New Orleans in 1982. In 1999, she discovered the Internet, and produced and designed an online serial, “Northern Lights”.

The next year, Hollie began her involvement with the Miss America Organization. She served as business manager and webmaster for Miss Crescent City New Orleans. She had the honor and responsibility of being webmaster for the Miss Louisiana Organization from 2003-2007. Since then, she has struck out on her own. Her book, Myths America: A Practical Guide to Pageantry, has been used by contestants from the local level all the way to Miss America itself.

Hollie is active in Toastmasters and Beta Sigma Phi international sorority. She's currently working on her podcast and her second book.