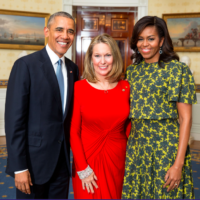 "Bonnie Carroll is President and Founder of Tragedy Assistance Program for Survivors, a national support network for the families of America’s fallen heroes. She turned the tragedy of the loss of her husband, who died in an Army plane crash in 1992, into a purposeful effort to create what is today a successful national program providing compassionate care for all who are grieving the death of a service member. Carroll also held government positions during the Reagan and George W. Bush administrations. She retired as a Major in the Air Force Reserves and also served 16 years in the Air National Guard. She currently serves on the Defense Health Board and the Board of Iraq and Afghanistan Veterans of America. Carroll was awarded the 2015 Presidential Medal of Freedom by President Barack Obama and was featured in PEOPLE magazine as “a hero among us”. She holds a degree in Public Administration and Political Science from American University and has completed Harvard University John F. Kennedy School of Government’s Executive Leadership Program on International Conflict Resolution."